Varsity: the opportunity for the Blues to deliver a season-defining performance that would cap off a hugely successful year both for the team and for the club as a whole. The Blues had been showing all the signs of peaking at the right time, producing
easily their best rugby of the season in recent weeks as Varsity drew near and enjoying a hugely focused and productive pre-Varsity camp over the final weekend in February. The impressive strength in depth developed at the club over the last term in particular meant that every member of the final Varsity squad had been pushed all the way to be at the best to secure their spots, and everyone was eager for the opportunity to prove themselves on the biggest stage at the Twickenham Stoop. The teams’ respective results over the course of the season might have led to the Oxford side being installed as comfortable pre-match favourites, but there was certainly no hint of complacency among the players, all of whom knew that the relevance of recent form can be greatly diminished in the intense cauldron of a Varsity match. The Blues were calm and assured, quietly

confident that if they executed their gameplan with the efficiency and precision that they had demonstrated in the previous few weeks they would be in a fantastic position to retain the K J Lee Trophy. The unity of the club could be clearly seen in the Blues’ determination to
win the match not just for themselves, but for their colleagues in the second team, the Maroons: Cambridge’s withdrawal from the reserve grade Varsity match owing to their failure to raise a full side – robbing the Maroons, themselves playing sparkling rugby league all term, of a showpiece finale to their own season – had been additional fuel to the fire for the Blues.

Oxford’s mantra since their pre-Varsity camp had been “Be The Storm”, a reference to their desire to impose themselves and their brand of aggressive and expansive rugby on their opposition from the off, being proactive rather than reactive. This plan bore fruit as early as the second minute: after Josh Halstead, Oliver Nash, and Alex Hamilton had set the tone with some bone-rattlingly big hits, the Blues won possession from a Cambridge knock-on and pivot Hugh McCormick found Marcus-Alexander Neil, the Oxford captain breaking a weak attempted tackle to score. McCormick converted nonchalently to extend the Ox
ford lead to six points. Soon after, Cambridge were awarded a penalty in the Oxford half, only to find themselves driven back a full ten yards by more ferocious Oxford defence. The Blues were dealing well with Cambridge’s limited and predictable attack, and what few Light Blue forays there were towards the Oxford line were undone by poor final kicks. Commentators for Sky Sports, already sensing the scale of the mismatch between the two sides, were moved to describe the Oxford side as “bigger, faster, and stronger” than their Cambridge counterparts, and – as if to prove their point – loose forward Josh Halstead intercepted a wayward pass and broke half the length of the pitch, fending away one would-be tackler with a hand-off of monstrous proportions. Oxford were awarded a penalty that put them deep into Cambridge territory, and the ball was worked wide to Halstead who offloaded to the onrushing Robbie Cowan for the fullback to score the second Dark Blue try of the day. McCormick again added the extras: Oxford 12, Cambridge 0. Oxford were again celebrating me
re moments later as McCormick and Neil reprised their earlier double act, McCormick darting through a gap in the Cambridge defence and giving Neil an easy run in under the posts. Another successful McCormick conversion put Oxford eighteen points ahead, and the game was barely a quarter of an hour old.

Having raced into such a commanding lead, the Blues refused to allow themselves to take their foot off the pedal, instead continuing to mine their rich vein of form for a further flurry of tries. A number of huge tackles from Neil, Halstead, Nash, second row Tom Sneddon, and Nigerian prop Obiora Agbim epitomised the tenacity that went in to the Oxford defensive sets, and in attack McCormick and fellow pivot Ben Calverley were pulling the strings with aplomb. On sixteen minutes, Calverley ghosted through an enormous hole in the Cambridge line before feeding wing Larry Knight for the try. Again McCormick b
isected the posts with his conversion, 24-0 the scoreline. That was to be the first score of an eight-minute first-half hattrick for the electric Knight. For his second, Neil combined with Calverley, the pivot again putting the wing away; Knight’s pace was simply too much for a Cambridge right side that had been repeatedly torn to shreds in the first twenty minutes. McCormick was unable to make the conversion from the wide angle. Scarcely a minute had passed when Knight was in for his third. After brilliant work in the build-up from Halstead, McCormick, and centre Matt Henshaw, the ball was worked to Calverley, whose kick Knight chased down to score despite conceding a substantial head start to his opposite number. The conversion drifted just wide again, but that could probably be overlooked with the score now 32-0 to the Dark Blues and the Sky commentators predicting a cricket score.

Cambridge were then granted a brief respite from the Dark Blue try-scoring onslaught; indeed, they ground out a couple of opportunities for themselves – first knocking on over the tryline after a kick had been fumbled by the Oxford defence, then being held up over the line after a powerful drive, before wasting the foundations for a sustained attack by throwing a forward pass. It was, however, back to business as usual on 35 minutes, Oxford regaining their poise and mounting an attack through a break from winger George Darrah. Henry Waite, on at pivot, broke the line and offloaded to prop and former captain Paddy Boyle. Boyle crossed the whitewash with ease – but not before humiliating the last defender by selling him an outrageous dummy pass. Waite was unsu
ccessful with the conversion, and half time came with Oxford leading 36-0. The story of the half could perhaps be summed up in two very telling statistics: Cambridge had missed twelve tackles by the half hour mark, and Oxford lead on successful offloads by thirteen to one. Cambridge had been unable to cope with the ruthless intensity of the Oxford defence and the potency and precision of their attack, and it was impossible to see any way back in to the match for them. Oxford head coach Dan Garbutt cannot have had to give too many more straightforward half-time team talks.

Just as they had come flying out of the blocks in the first half, Oxford scored almost immediately after the resumption. The kick-off was fumbled forward by Cambridge, and from the resulting set Calverley broke the line and put replacement forward Ben Fleet in under the posts. That Calverley could find the space that he did was testament to the quality of the lines being run off him to fix defenders; Oxford’s shape in both attack and defence was impeccable throughout, this
try just one example of the benefits of such good structure. Waite added the extras, and at 42-0 down the Light Blues of Cambridge were reeling once more. They reacted well, however, forcing a handling error and pouncing on the loose ball to race away for their first score of the day on 48 minutes. The try seemed to galvanise the Cambridge team, who for the first time in the match started to string together full attacking sets. In the 55th minute, another dropped ball as Oxford looked perhaps to be a touch too ambitious on an exit set saw Cambridge run in their second try. The Oxford players remained confident, though; it was, after all, only their own uncharacteristic errors that had cost them tries. As if insulted by the fact that they had allowed their opponents to get off the nil score, the Dark B
lues came back immediately with a classy try of their own: Nash drove hard up the middle of the pitch, the ball was worked wide to Calverley, and Henshaw went over in the corner. Waite converted for 48-10 and Oxford were back in full control of the game.

The Light Blues must have felt the fates were conspiring against them when Calverley’s over-hit kick rebounded off a post and into the grateful arms of centre Oliver Jones. Fortunately for them, Jones was unable to free his arms from the tackle to effect a potentially scoring pass. It would not, however, be long before the Cambridge players were once again congregating beneath their posts to ruminate on another Oxford try: after 63 minutes, hooker Hamilton darted around the side of a ruck before offloading to Nash for the rampaging prop to score. McCormick returned to kicking duties to slot the conversion, and at 54-10 the Dark Blues had equalled the record winning margin in Varsity history – with plenty of time to add to their tally. It was not all champagne rugby, though: the Oxford players showed their willingness to put themselves about in the tight exchanges and mix it with their opponents when necessary. Even the angelic-looking Jones got in on the act, indulging in some exuberant groundwork that attracted some stern words from the referee. Darrah, while unlucky not to get the quality of opportunity that Knight did on the opposite wing, was a rock under a number of tricky high balls, and you would be hard-pressed to identify anybody in Dark Blue who didn’t put in a performance they can be immensely proud of. By this point in the match it was clear that Oxford were looking to enjoy themselves with the result long since secured, and they capped a fine performance with an eleventh try – Halstead dextrously offloading to McCormick, who scythed through the defence and completed a fleet-footed run in. He conver
ted his own score, and with 71 minutes gone the score was now 60-10. There was time for Cambridge to sneak a late try from a one-yard burrow round the play-the-ball, but it will have been scant consolation to a team comprehensively outplayed in every department. That narrowed the gap back to a record-equally 44 points, but the record might still have been Oxford’s had Calverley managed to find a pass in the game’s final play after a Halstead offload reminiscent of Sonny Bill Williams at his best. 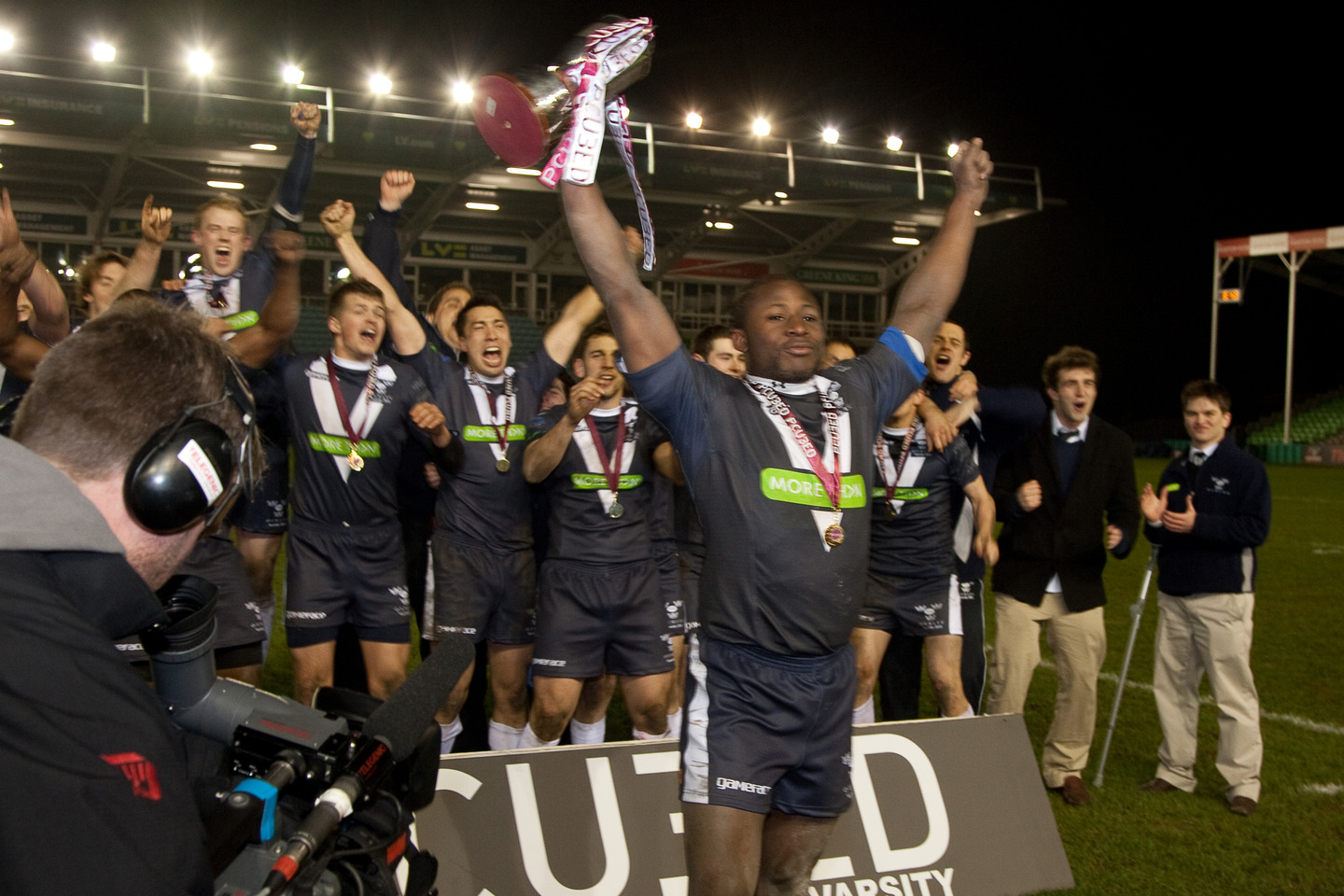 At the final whistle Oxford were triumphant by sixty points to sixteen, having scored a phenomenal eleven tries. Ben Calverley was named Man of the Match, but any one of a number of outstanding performances could have been rewarded with the accolade. The Dark Blues retain the trophy they won in such dramatic circumstances last year, and find themselves in an admirably strong position as they look ahead to next year’s match. Cambridge, on the other hand, face a period of considerable soul-searching as they seek to uncover a recipe for revival after such a resounding defeat.